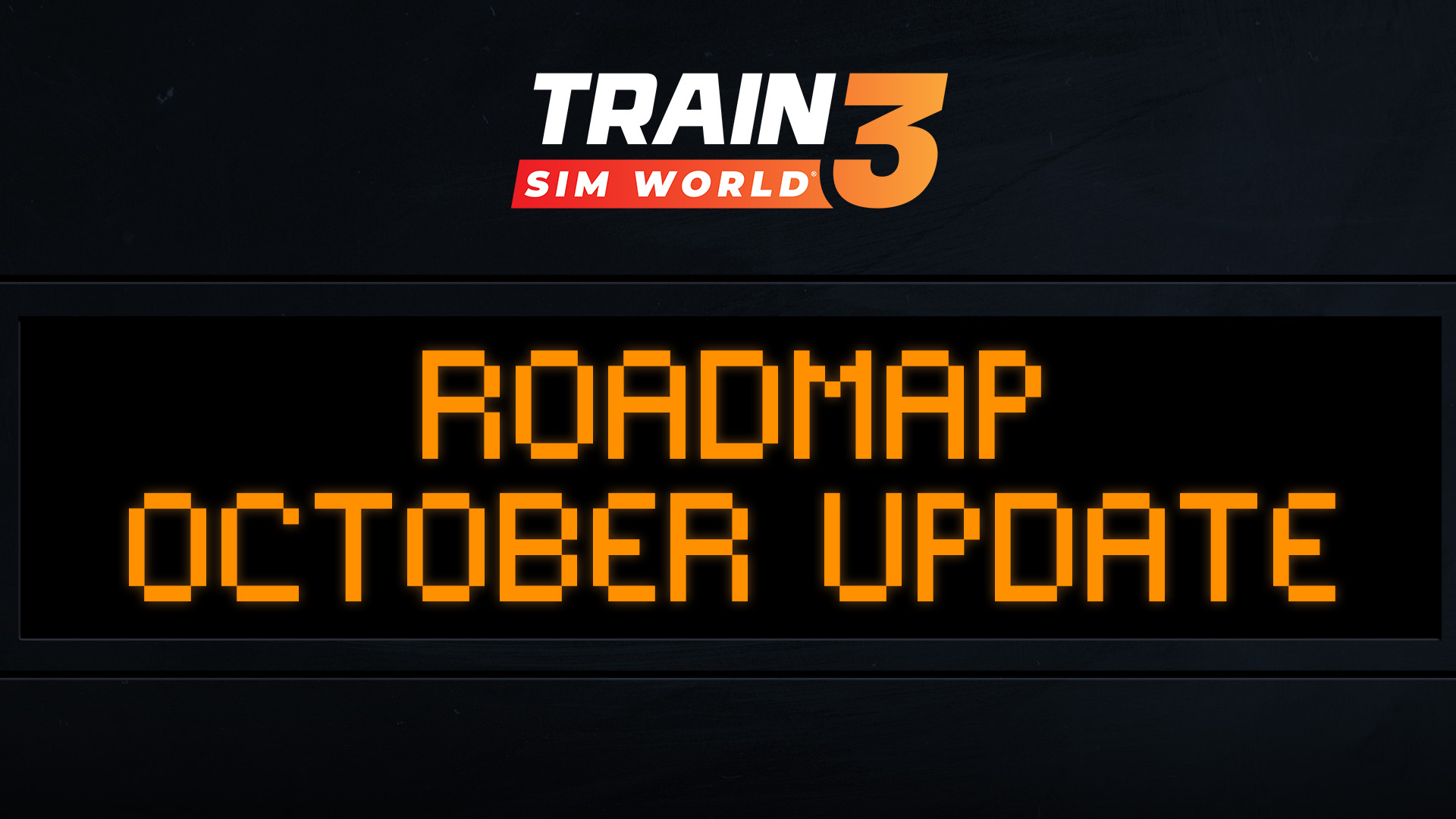 TL;DR (too long; didn’t read) summary
A quick summary for those who don’t want to go through the whole article. There are more details on all these points within the Roadmap.
4 new entries into the Roadmap
Work continues on Train Sim World 3 improvements, including Add-ons Manager, Save Game, and more
The Preservation Crew will become the ‘Special Projects’ team, with a new and improved focus
The much-anticipated ‘HST on Livery Designer’ update is coming
Alan Thomson Simulations joins the TSW Partner Programme set-up 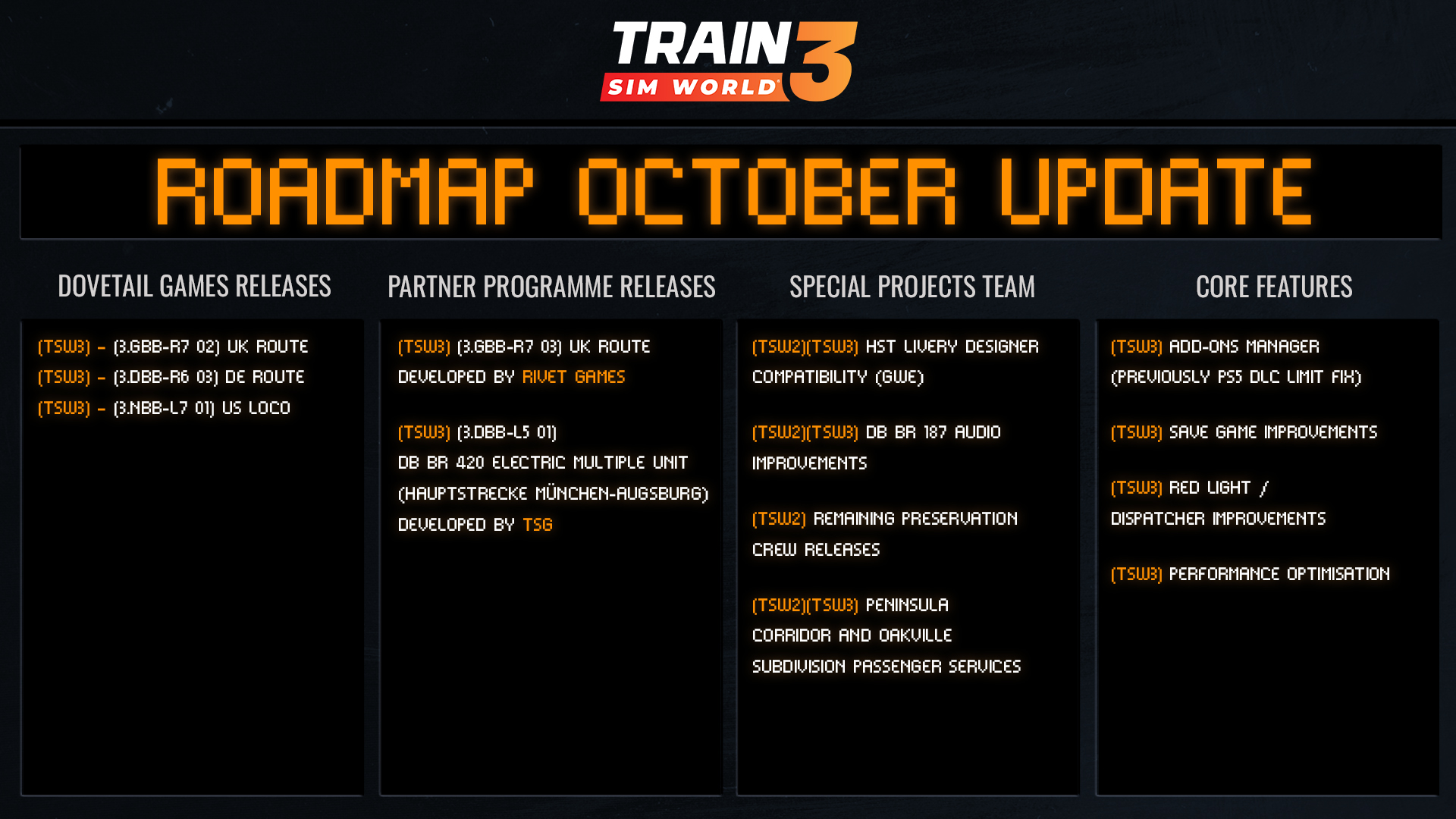 # The Roadmap
Happy nearly-one-month birthday to Train Sim World 3!
We’re still in the throes of post-launch improvements – the first of which came last week (you can check it out using this link), and included reimplementing the Save Game toggle (more on that below) – and we wanted to start by once again thanking everyone for their ongoing feedback for the new game. We’ve been delighted to see how many people have been helping each other out, and providing positive, constructive feedback our way. We’re capturing as much as we can to improve, fix, and enhance your experience.
Okay, onto the fun stuff. We’ve added new stuff to the Roadmap! Whilst we’ll be revealing the details in due course, you can use the ID codes provided in the Roadmap listing to get an idea of what we might be planning. But, to summarise:
As usual, we’re not providing timelines for any of these at this point, and will be providing more information when the features and content are locked in.
In this month’s Roadmap we’ll also be providing you with some more information on longer-term TSW3 improvements (including Save Game, accessibility, eye adaptation, performance, and more), a new section in which we’ll be covering our Third-Party developer updates, some exciting HST-related Livery Designer news, and more on the Preservation Crew’s new role in this brave new world of TSW3.
Shall we get to it, then?

We’ve grabbed an update for you on lots of different Train Sim World 3 improvements – here’s a quick summary of what you need to know.
Loco Add-on Bundle
We launched the RHTT, DB BR 182 Dispolok, and Santa Fe F7 on Tuesday, and will be monitoring your discussions around them.
One of the immediate things you mentioned was the size of the spray on the RHTT wagon. We have an update currently in testing that makes the spray significantly larger, even at high speeds, as you can see in the images below. This will come in a future update. 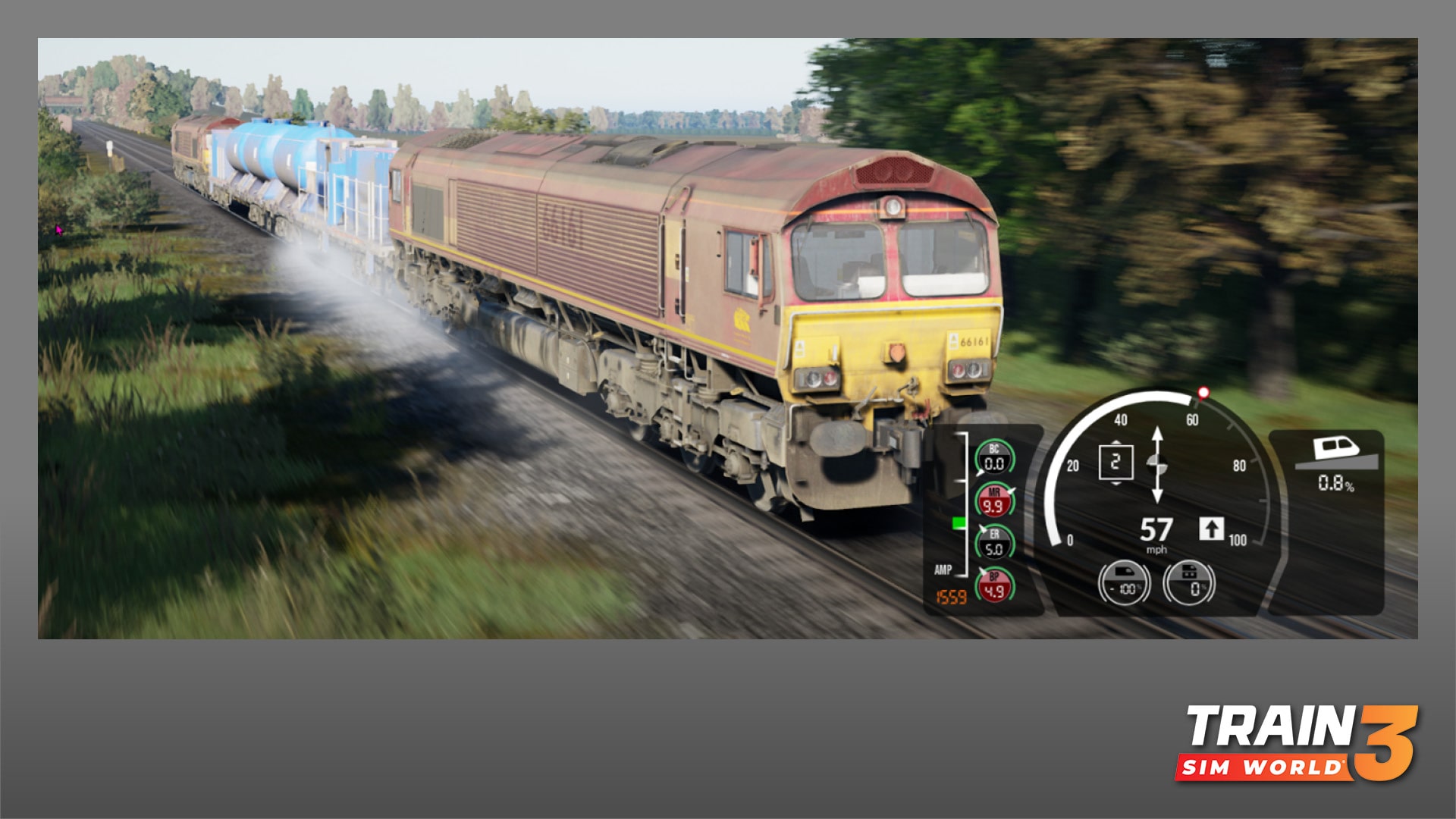 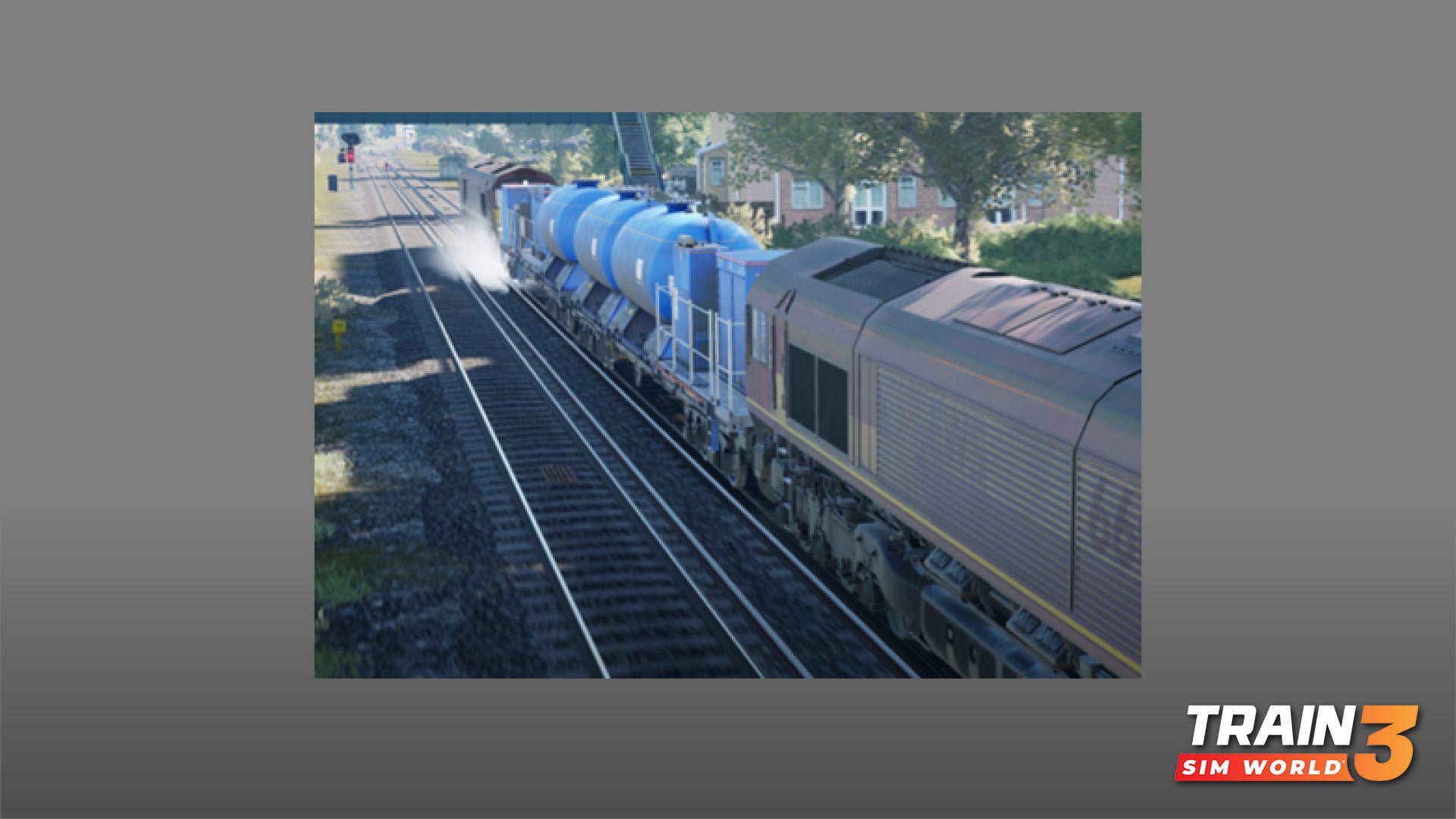 *Increased spray for the RHTT. The plan is that these locos, where relevant, will layer into future content.*
Save Game update
As previously mentioned, last week we added in a Save Game toggle in the Settings menu, allowing you to enable the same Save Game experience you experienced within Train Sim World 2 (a quick reminder that if you experience any issues whilst using it, to report them on this thread [https://forums.dovetailgames.com/threads/report-a-save-game-issue.59567/#post-549171] so we can investigate).
But we know we can improve it – so, a first batch of improvements are in testing, and planned to be released in the next game update, all being well. These won’t solve every issue, but should address a number of core issues we’ve been able to identify – so we’re expecting a marked improvement.
Also with that update, based on your initial feedback we’ll be adding the Save button to the footer of the Pause menu, making it a lot easier to use.
We’ll continue to investigate individual issues, but progress is being made, and we look forward to bringing you it in an update soon.
Add-ons Manager
Work is underway to port the Add-ons Manager to Train Sim World 3, after releasing it in Train Sim World 2 in September. We’ve had good feedback so far, and are ironing out any teething issues players have been experiencing so far in TSW2 and incorporating them into the TSW3 version. When we’re happy, it’ll go into a build for release.
UI/settings/toggles
We’ve seen so many great responses to the new Train Sim World 3 UI and player experience, and we want to keep improving it. As well as the Game Save toggle and mouse sensitivity sliders ( the latter of which we can confirm will be operational with the next game update), we’ve also added in a toggle for removing tutorials in Quick Play, based on your feedback.
But we’re not going to stop there. We continue to make bug fixes and improvements to the UI for each update going out. Here are some of the areas we’re looking at improving in future patches (this list is by no means exhaustive): 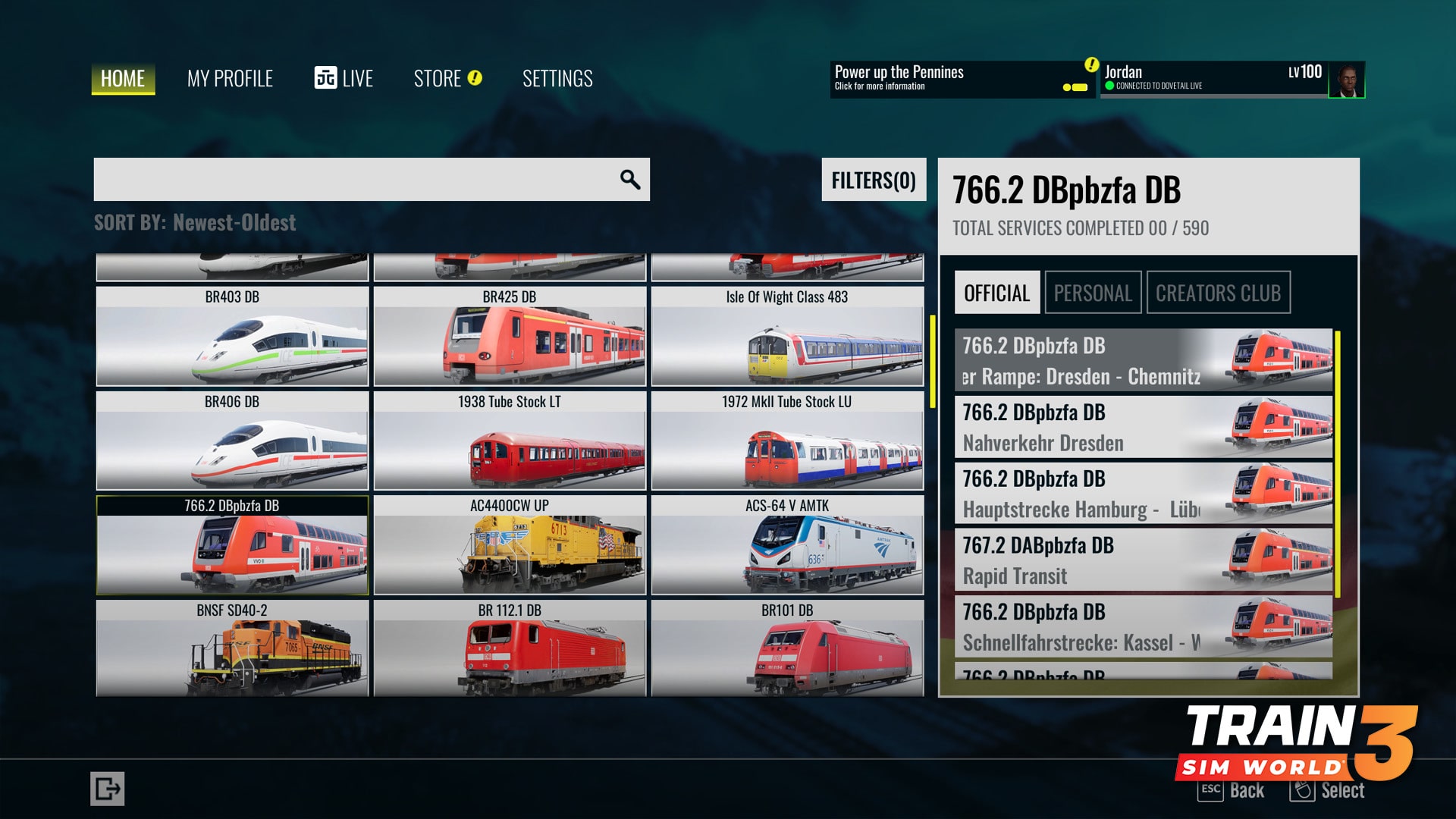 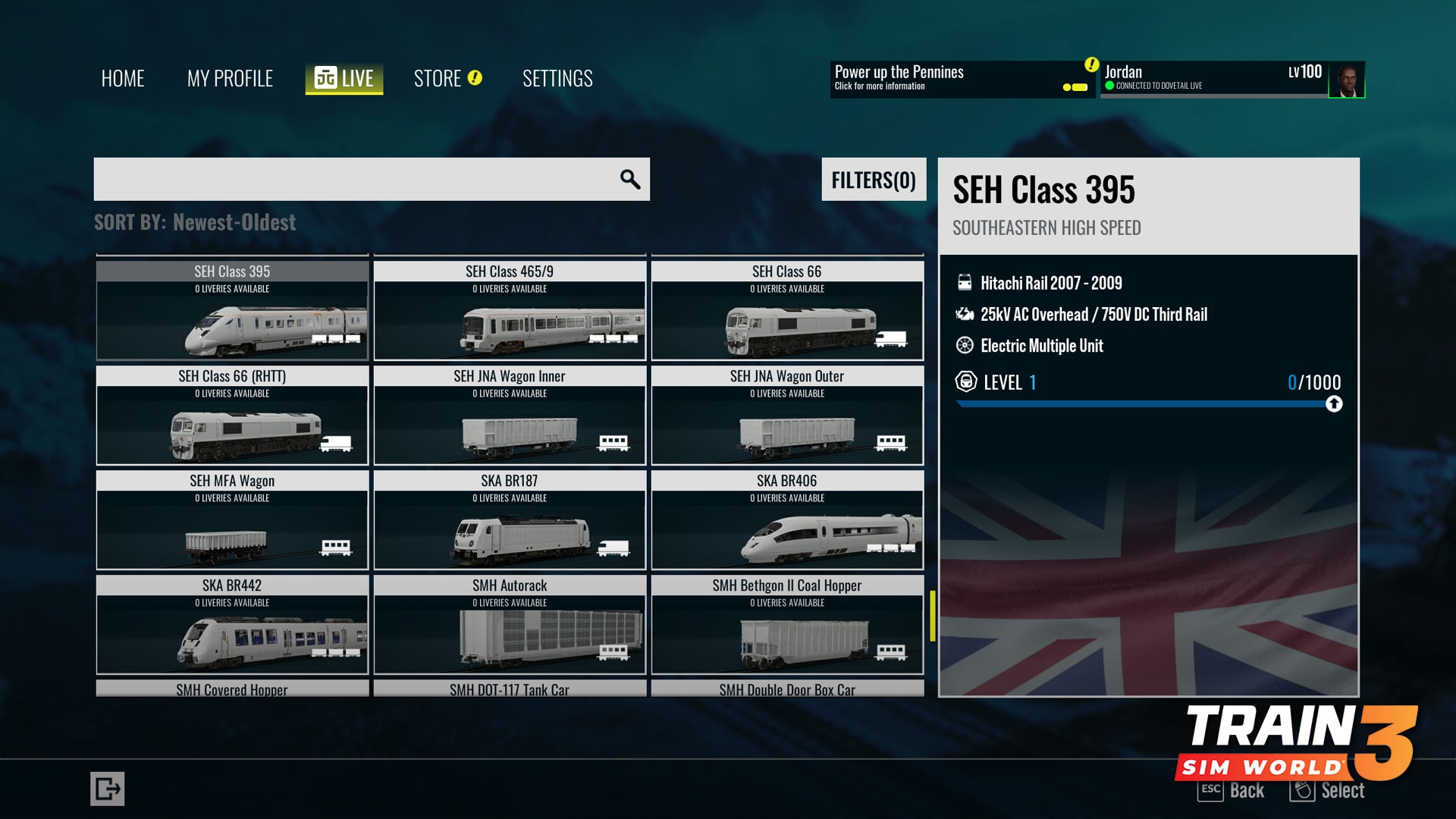 The new UI with the routes for each loco included. 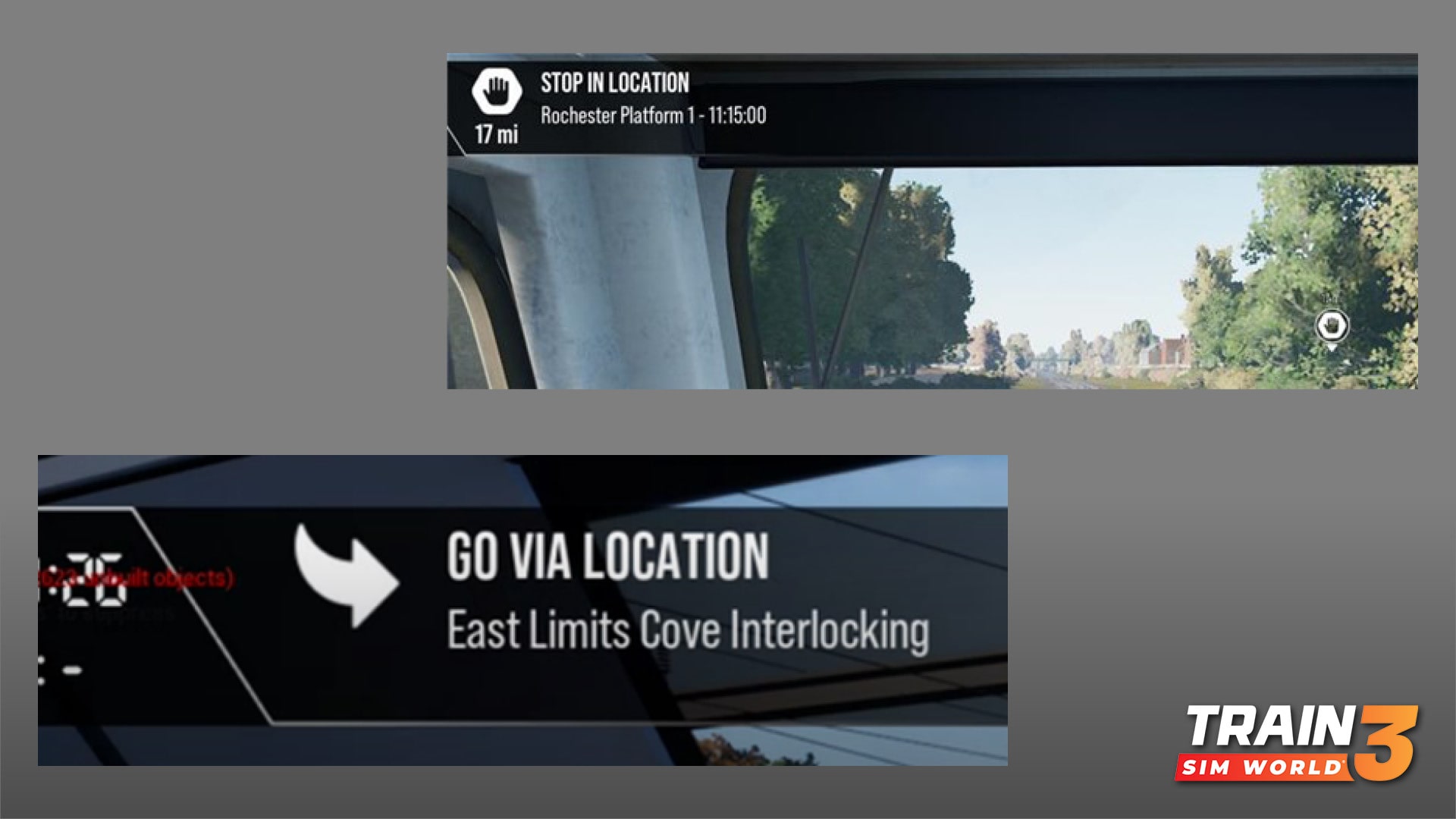 We know there has been a clamour to introduce Livery Designer compatibility to Great Western Express’ HST – well, we have good news!
The Special Projects team have been working hard to enable Livery Designer support for the Class 43 High Speed Train from Great Western Express. While this project is well advanced it is not yet finished. Currently the train is having test liveries applied, both real and fictional to review applications and ensure at least to a good degree that what we think players will want to do is achievable. 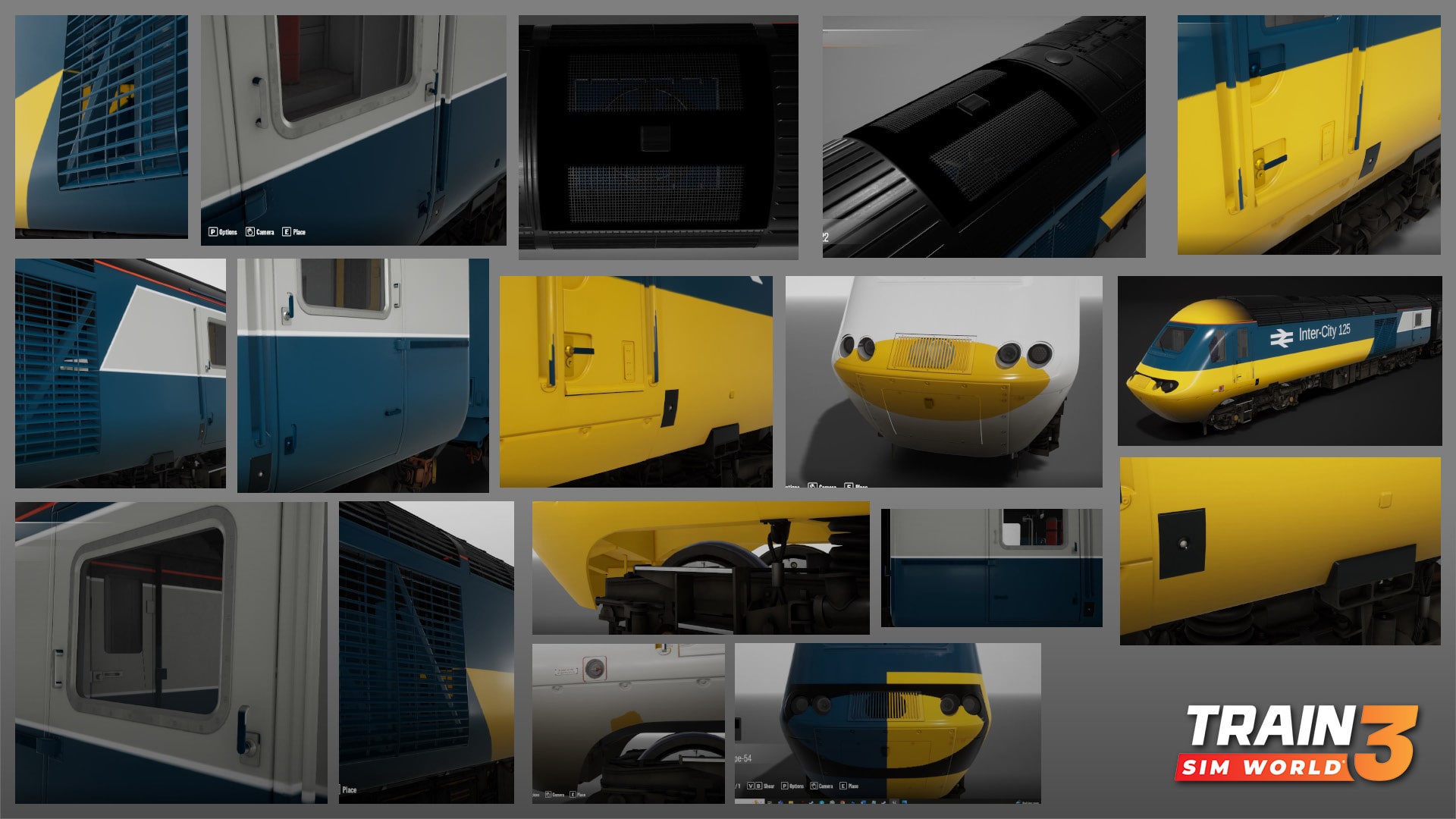 Screenshots from Adam’s folder of bits and bobs.
Provided here are screenshots from one such test livery. It does feature some errors that will need to be resolved before release, but we're really excited to see the availability of this train in the Livery Designer, and we hope you are, too. 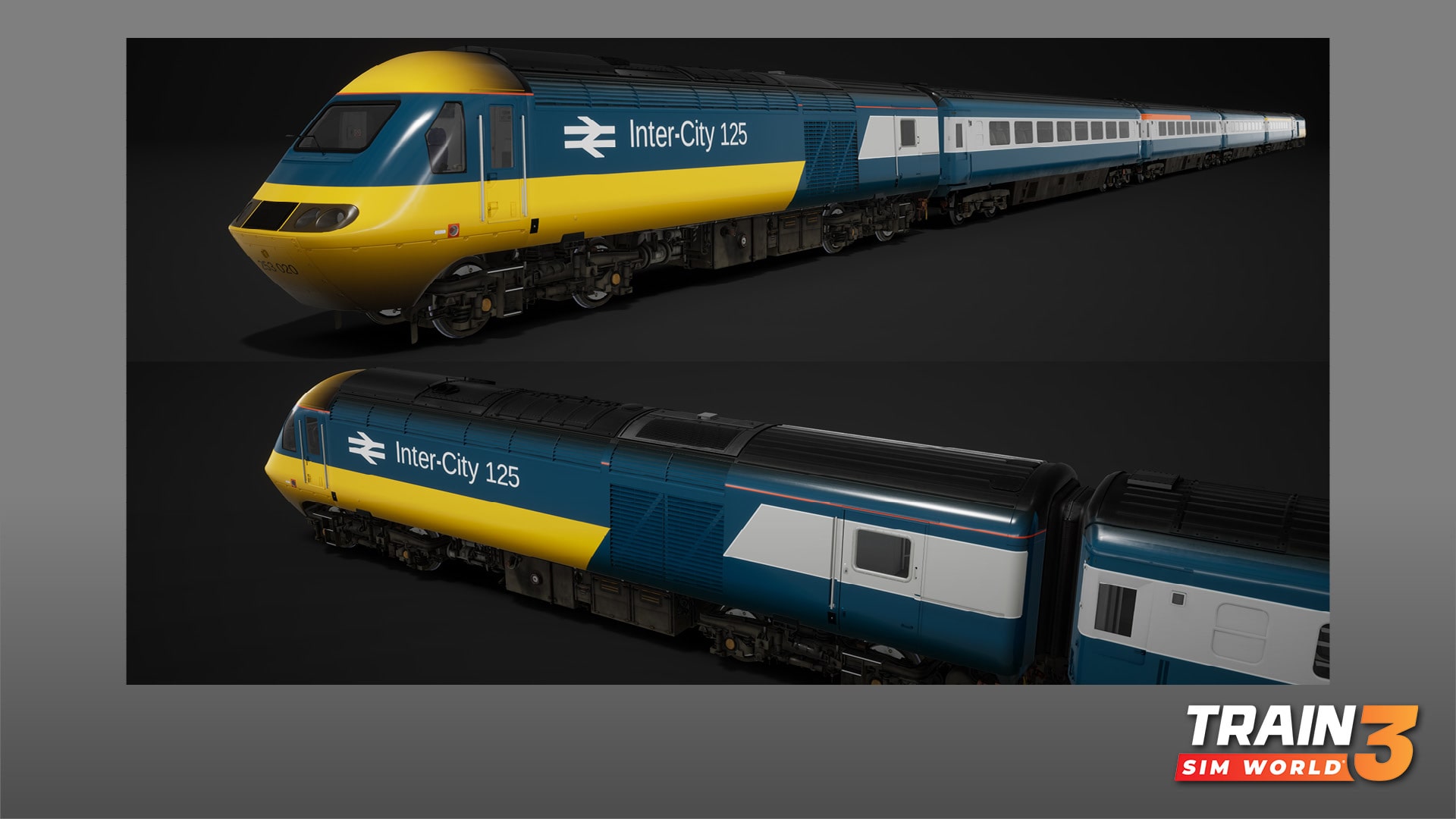 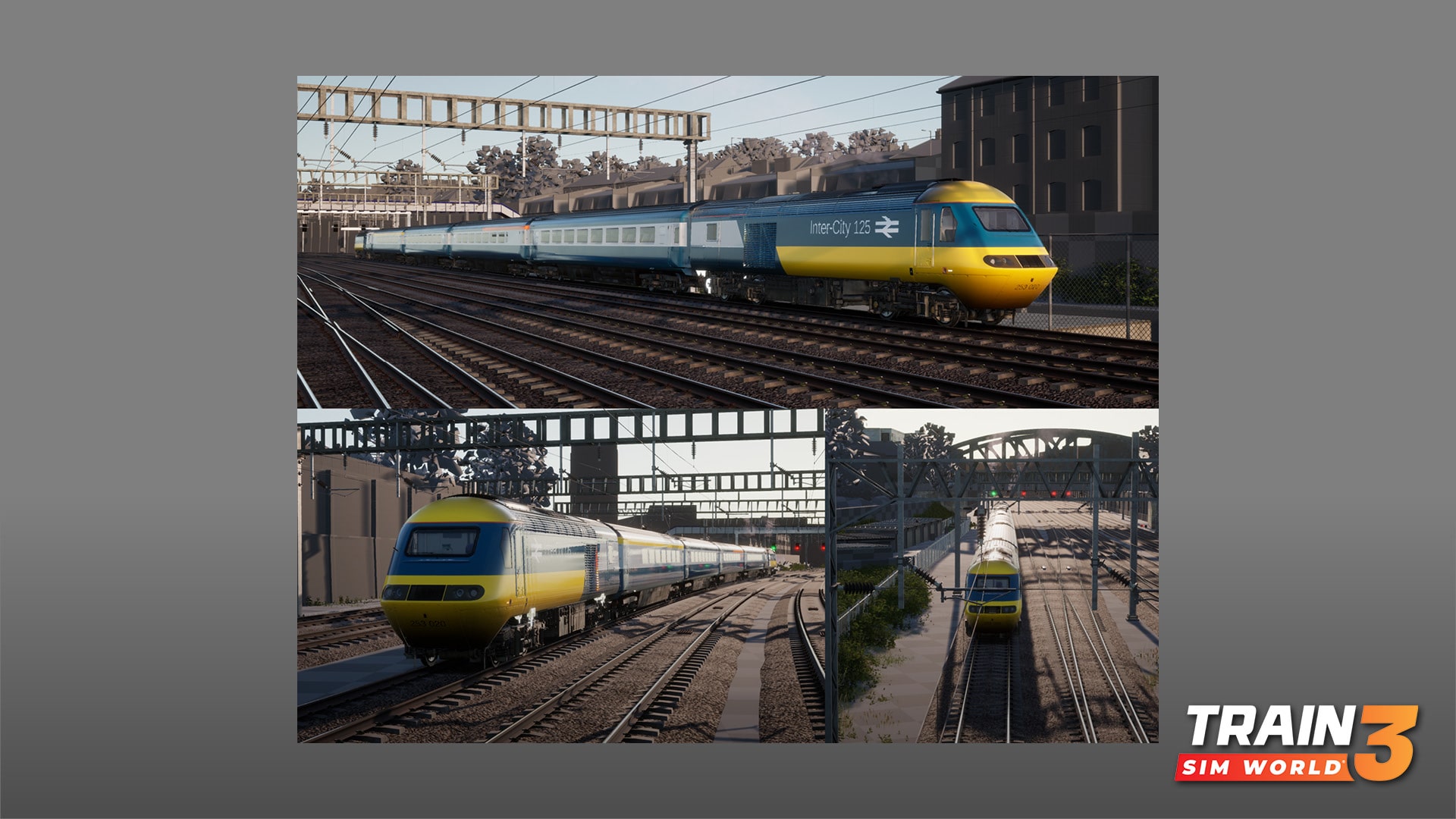 The updated HST in all its glory.
The train will appear in the livery designer as '2+4', 2+7' and '2+8' formations as well as the Class 43 locomotive on its own. Finally, as part of enabling the ability to implement custom liveries on this train, we will be removing the long defunct 'blue' HST from TSW2 and TSW3.

Rivet Games, Skyhook Games, Just Trains & Train Sim Germany are all working on new routes that all come with new trains, though they are only focused on electric and diesel traction. We have only added content to the Roadmap where the content is progressed to a suitable level though. Both Train Sim Germany and Just Trains have seen expansion of their teams working on TSW developments in recent weeks.
We’re really excited to welcome a new partner to the TSW environment - Alan Thomson Simulation. They already have an extensive catalogue of high-quality Train Simulator Classic releases so we look forward to what they will bring to the Train Sim World franchise.
Here’s a little blurb from them:
Alan Thomson Simulation is a team of rail enthusiasts who have found great enjoyment in exploring their passions producing headline projects for Train Simulator Classic focusing mainly on the West and East Coast Mainlines, Chat Moss and Fen Lines. We have built up a strong community of like-minded rail and train enthusiasts and operate one of the largest third party DLC sites and social media groups for TS Classic.
*We have strong relationships and a good history of working with the United Kingdom rail industry and following on from the development of Train Sim World 3, we are excited to be bringing some of this expertise and experience to a range of new products which we are confident will push the boundaries of what's possible. We are also working with yet another partner who will bring a new country to the TSW line up. More on them in the future.*
Details of all partner developments will be announced and discussed in due course.
We are working with Skyhook Games on upgrading the DB BR 187 audio, and it is now on our Roadmap for the Preservation Crew/Special Projects team.

Thanks for your patience as we’ve been building new Store pages and uncoupling the content from their TSW2 routes. Our plan is for the Add-ons to be available individually (and as a bundle) before the next Roadmap – if you already own the bundle in TSW2, you will of course be entitled to it in TSW3.

We recently released the Add-ons Manager for Train Sim World 2 console players, and delivering the current list of Preservation Crew/Special Projects improvements to TSW2 players is still something we’re working on.
When content is released, information about its contents will be available on our ‘Announcement’ forums.

These are forthcoming add-ons that are being developed by teams outside Dovetail Games. Where details are still being finalised for a release, we are including the ID code for it when possible. This will give you a good idea of what to expect. To see what these ID codes mean you can refer to this post

Core features are larger projects. These may be significant new pieces of functionality or changes that will affect players on one or several different platforms. Often requiring more time in development this list may move more slowly than others.

Projects that players will notice but don’t fall into one of the other categories.

Projects that are being tackled by the Preservation Crew. Many of these upgrades will simply be adding the latest game functionality to an older route. The additions or changes in the “upgrade” will include some or all of the following: station departure boards, animated crossings, platform climb-up functionality, improved track rendering, Rush Hour passenger density and appearance, support for RailDriver, contact signaller functionality, minor fixes to scenery, minor fixes to audio, minor fixes to gameplay, minor fixes to menu items, Livery Designer compatibility and Scenario Planner expansion. We have included a ‘scale’ of the size of the work/features put into the update.
Note: Preservation Crew updates will continue after the launch of Train Sim World 3
Items that have been removed from the Roadmap. This is either because they have been completed, their status having changed or the project having been suspended.
Please join us tonight on Twitch or YouTube (Thursday, October 6th), where we’ll discuss the above (and more!) with Matt and JD at 19:00 UTC. If you have any questions, please add them to this thread
You can discuss the contents of this month’s Roadmap on our forums below.